Blog Tour and Book Review: The Bronze and the Brimstone by Lory S. Kaufman 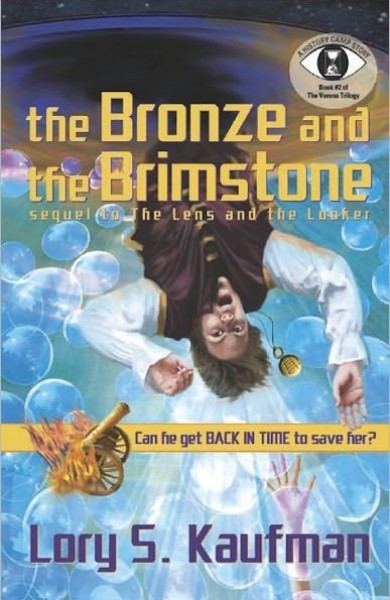 What could go wrong in the 14th-century for three time-traveling teens?   How about – EVERYTHING!
Hansum, Shamira and Lincoln, three teens from the 24th century, are trapped in 14th-century Verona, Italy. They’ve survived many deadly experiences by keeping their wits about them and by introducing futuristic technology into the past. Principal among these inventions is the telescope, which brought them to the attention of the rich and powerful.
But standing out can get you into unexpected and dangerous situations. The nobles of Verona now believe Hansum is a savant, a genius inventor, especially after he brings them plans for advanced cannons and black powder. Being the center of attention is great, but the potential for trouble is now exponentially greater because people are watching Hansum’s every move.
Meanwhile, artistic genius Shamira has fallen for a Florentine artist with bloody and disastrous consequences. Lincoln, considered an incompetent back home in the 24th-century, has blossomed – at least until he’s shot in the head with an arrow. And Hansum, after secretly marrying his new master’s beautiful daughter, Guilietta, is offered the hand in marriage of lady Beatrice, daughter of the ruler of Verona. To refuse could mean calamity for all the teens.
Amazingly, none of this is their biggest challenge. Because a rash illness is spreading across Verona – and it is threatening to consume everyone.
Do they have a future in this past?
About the Author:
“I write Post-Dystopian fiction. After society’s collapse, which is imagined in so many great dystopian stories, humans will either fade into history, with the dinosaurs, or, if it learns the right lessons, society will go on to construct a civilization to last tens of thousands of years. History Camp stories are the exciting adventures of young people doing the latter.” -Lory KaufmanOn the artistic side of Lory’s career, he’s written, acted and directed children’s theatre and musical theatre. He enjoys art, especially sculpture. He loves science fiction and historical fiction and he has been deeply involved in the green movement all across North America. All this shows through when you read his work. Lory has three grown children and works and lives in Kingston, Canada.
To find out more about Lory visit www.history-camp.com
My Opinion:
I reviewed the first book in this series, The Lens and the Looker and enjoyed it very much. I don’t read much young adult fiction but this trilogy has a tie in to 1347 Verona, Italy, so that immediately piqued my interest.
This second book continues the adventures of the three teenagers, Hansum, Shamira and Lincoln who had been sent to a History Camp to teach them about the lessons of the past so that they could use them in their post apocalyptic world. They felt they didn’t need to know anything about the past – they knew it all.
Hansum brought a genie with him to History Camp and the children caused so much havoc they were sent to the REAL past by a mysterious being from the future. They had to learn to live like medieval Veronans.
The first book set up this second book very nicely as the boys are apprentices for the “discs for the eyes” maker, their Master and Shamira is the kitchen girl. They have settled in pretty well but have trouble balancing their future knowledge with their living in the past. They start introducing that knowledge to the delight of their master but it starts getting them noticed by the wrong people.
At the same time Hansum, known as Romero has fallen in love with the Master’s daughter Guillietta. They marry secretly but this causes even more problems for both of them.
Mr. Kaufman has created a wonderful mythology that I was delighted to continue in this second book. The teenagers are learning from some mistakes but creating others and dealing with life in a time that doesn’t have easy answers. They are forming relationships with these very real people in the past that make it very, very difficult to decide to return to their real world. The characters are believable – as much as they can be in a fantasy based book – and I very much want to see how it all ends in the third book.
The Bronze and the Brimstone is available on Amazon.com
Disclosure:  I received a copy of The Bronze and the Brimstone from Pump Up Your Book Promotions. Any opinions expressed are my honest opinions and were not impacted by my receipt of the free book. I received no monetary compensation for this post.
Share
Tweet
Yum
Share
Pin
Email
blog tour and book review